Roll On, Bob. Fall Tour Announced, To Ramona and the Bob Dylan Project 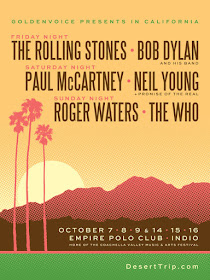 The next leg of Bob Dylan's Never Ending Tour has been announced. The kickoff event is the Southwest superconcert that created a stir when tickets went on sale earlier this spring: Three nights, six legendary names from the Sixties. Indio, California is host city for that event, a town that bills itself as the City of Festivals. It's proximity to L.A. makes it accessible. It's location in the Coachella Valley near Joshua Tree State Park makes it desirable.

There will never be another event like Desert Trip, I suspect. All these guys were born in the Forties and are now in their seventies. From what I hear from people who have seen each of these supergroups in recent years, each still puts on memorable shows for their fans. I'm certain it will be no different on this occasion. And yes, I'm sorry I can't be there.

Nice symbolism in the poster. It's a sunset scene in the Southwest, though for Dylan, Inc. it's the kickoff for another round of concerts that will wend its way across the South through the months of October and November. Full schedule here.

* * * *
This week I discovered yet another great resource for Dylan fans. It's called The Bob Dylan Project and it's found at TheBobDylanProject.com

Dylan's significance may have been established simply by the quantity of truly great songs he produced, or by the ground-breaking character of the songs he birthed in the early to mid-Sixties. But it could also be said that the creative interpretation of these songs during a lifetime of performances has also made him unique amongst performing songwriters.

What the Bob Dylan Project has done is assembled in one location links to all recorded performances of Dylan material, from the original release to the alternate versions. It also includes links to recordings of alternate versions of Dylan's songs by other artists. For scholars wishing to take a deeper dive into the music of Bob Dylan, this is the mother lode. For enthusiasts desirous to expand their awareness, it's likewise a great resource. And a website worth bookmarking.

It's 2016. In the Sixties I doubt there's a one of us who gave any thought to the notion that people would be still buying tickets to see the Rolling Stones, Paul McCartney, The Who, Neil Young, Pink Floyd or Dylan. If you imagined this, fifty years ago, I want to hear about it. I can't imagine that any of us gave a half a thought to such a thing.

For the past several weeks I've had the song To Ramona circling about my thoughts. I find it a moving song, emotively rich and tender, lyrically evocative and poetic, so very unlike the simplistic pop mush riding the Billboard charts. I've been wanting to write about it, but wasn't sure what new insight I could bring.

The song, whose tune is based on a Mexican waltz, was released 52 years ago this week (August 8). Dylan first performed it live the month before at the Newport Folk Festival in 1964. Since that time he has performed it more than 370 times in concert, up through 2015. Here is a link to the various ways the song has been recorded, now collected at The Dylan Project.

Your cracked country lips
I still wish to kiss
As to be under the strength of your skin
Your magnetic movements
Still capture the minutes I’m in
But it grieves my heart, love
To see you tryin’ to be a part of
A world that just don’t exist
It’s all just a dream, babe
A vacuum, a scheme, babe
That sucks you into feelin’ like this

I’d forever talk to you
But soon my words
They would turn into a meaningless ring
For deep in my heart
I know there is no help I can bring
Everything passes
Everything changes
Just do what you think you should do
And someday maybe
Who knows, baby
I’ll come and be cryin’ to you
Copyright © 1964 by Warner Bros. Inc.; renewed 1992 by Special Rider Music

The song brings back a long ago memory of something beautiful and sad. Perhaps the song's beauty is in the universals it contains, providing opportunity for listeners to make their own connections. The vivid imagery and language stirs on many levels with a timelessness that outlives the moment of its birth.