Mark Gober Wants to Put an End to Upside Down Thinking

My grandmother had a stroke in the early 1960’s that resulted in brain surgery at the Mayo Clinic. During the surgery, she had an out-of-body experience in which she was hovering over the operating table observing about 20 minutes of activity by doctors and nurses. An educated woman, this experience sent her on a quest to understand what had happened. Where does the “I” lie in a human? My grandmother was a conscious person looking down upon her own body.

When I was in college I would visit her and we’d discuss the range of things that were routinely on her mind. Is it possible that our minds have much greater power than we realize? Is it possible to move objects with the mind? Is mental telepathy real? Can we know the future? What about remote viewing, where we see or sense something from a distant location? What about communication with people after they are deceased?

I will tell you here that I’ve had three of the preceding experiences personally. Likewise I have had a lifetime interest in philosophy, and how the mind works. For this reason, Mark Gober’s An End to Upside Down Thinking captured my attention because of its bold promise to dispel the myth that “the brain produces consciousness.” 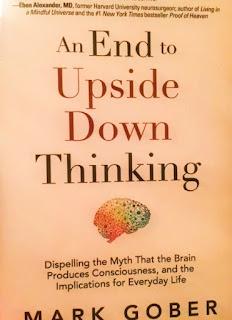 His book is essentially an assault on the arrogant assumptions of science, specifically as it pertains to materialism. Over and over throughout the course of a lifetime we’ve heard the old, old story of how there was a big bang and then all these atoms and molecules kept doing things that led to the emergence of DNA and life and evolution and how the robin’s nest-building developed over millions of years of evolution and the chameleon’s remarkable self-protective color shifting evolved and on and on till there was humanity.

Now that we’re all humans, Gober asks pointedly, where did consciousness come from? How did being aware during out-of-body experiences come from the evolution of matter? How does the notion of life after death evolve from nothing?

In the face of these questions, science has walked down two paths, stemming from their opposing presuppositions. If people “experience” paranormal events or a spiritual visitation after the death of a loved one – as my wife and I and my grandmother have experienced – there will be scientists who deny our experience and explain it away as something chemical in the brain for no other reason than they have already concluded that such can never be.

GOBE'R'S BOOK ADDRESSES THESE ISSUES first by explaining the paradigm shift involved, and then by analyzing the variety of ways in which the inexplicable has been experienced.

In the Preface Mark Gober sets up a framework for the ideas he is about to present. “Whether you realize it or not, most of modern society’s thinking is based upon a philosophy known as ‘materialism’—the notion that physical material, known as ‘matter,’ is fundamental in the universe. In other words, matter is the basis of all reality. Everything is comprised of matter, and everything can be reduced to matter.” Gober immediately undermines this premise.

First, he cites Dr. Bernardo Kastrup, who describes Materialism as “a reasonable castle built upon a rotten foundation.” With a few quick brushstrokes he produces a question that forms the basis of what is to come: “How does a physical body that you can touch produce a non-physical mind that you can’t touch?” Reading this brought me back to my Philosophy of Mind class at Ohio University. Our first paper dealt with the issue of where does the “I” reside in “Who am I?” The problem we had to write about was this. Suppose you wake up one day and your brain has been exchanged with the brain of a person in England. What would you experience? Gober notes that issues surrounding the mind are at the center of what Science magazine has identified as the second hardest question in science: How can something as immaterial as consciousness arise from something as unconscious as matter?

FROM START TO FINISH he delivers quotes and observations which show that Gober is not acting in isolation. For example, this statement from stem-cell biologist Robert Lanza, MD and physicist Bob Berman: “Nothing in modern physics explains how a group of molecules in your brain create consciousness.”

In some ways he's like a newborn child whose eyes have been suddenly opened. Or perhaps Plato's man-in-the-cave who discovers not only that the shadows are only shadows but there's a whole world of light and wonder above ground.

Chapter one introduces the author, with an overview of the book's contents. Chapter two is titled: The Unproven Assumption: "The Brain Produces Consciousness." In chapter three Gober finishes laying the groundwork with a deep dive into Quantum Relativistic Chaos: Proven and Accepted Science that Defies Common Sense. Chapters four through eleven each deal with specific topics beginning with remote viewing (RV), mental telepathy, precognition, etc.

When my grandmother and I would talk about these things in the early 70's she would tell me that the Soviets were studying all these things as if they were real. Gober here presents documents showing how our own CIA was also conducting experiments in these areas, with findings that verify rather than deny some of the premises of the book. 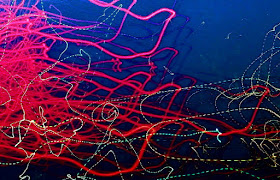 Much has been written about the conflict between science and religion, with scientists themselves on both sides of the issue. Some, in awe of the design and spectacular wonder of the creation, believe it is impossible that this all occurred by accident. Or as the psalmist write, "The heavens declare the glory of God." That is, God's signature is all over creation.

Other scientists, like Richard Dawkins, ridicule faith, much as Marx calls religion the opiate of the masses. Gober cites Dawkins' remark in the preface: "What is faith but belief without evidence?" In response, the author of the Book of Hebrews in the Christian New Testament states that Faith is the evidence of things unseen.

The front cover features a quote by former Harvard University neurosurgeon Eben Alexander, MD, comparing the ideas in this book to the Copernican Revolution, which he states will be minor in contrast. The word "revolution" is probably misleading, though. The ideas of Copernicus probably took a century to become adopted as accepted wisdom.

An End to Upside Down Thinking is a 2018 release by Waterside Press and available on Amazon.
Ed Newman at 8:30 AM
Share