Auction houses like Sotheby's and Christie's are frequently in the news when an important painting by Picasso sells or original handwritten lyrics from a famous Bob Dylan song. Less well known to the public-at-large, though not to their clients and fans, is an auction house in Chicago called Potter & Potter which has announced that their October 20 auction will include the late John Bushey's collection of Houdini pitch books and other magic memorabilia. Bushey, long time host of KUMD's Highway 61 Revisited Dylan-themed radio program, was also a highly respected magician and collector.**

Potter & Potter specializes in the sale of collectibles and antiques of all types, including paper Americana, vintage advertising, rare books, coin-op, playing cards, gambling memorabilia, vintage posters, prints and magicana -- antiques and collectibles focused on magic and magicians. If unable to attend, buyers can bid online or by phone.

The Bushey Collection is possibly the most complete collection of its kind in the world. Harry Houdini was not only a masterful magician, he was likewise a masterful promoter. For each show wherever he went he would produce a new pitch book or program that told his story. Each was unique for each city he travelled to. When I got the "grand tour" of John's handcuff collection in 2014, he said that he had acquired all but two of these. 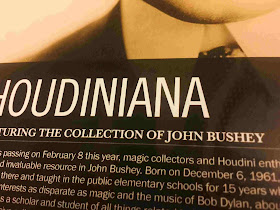 Our October sale features the Houdini collection of John Bushey. Known as a true scholar and student of all things Houdini and escape related, John assembled one of the best collections of Houdini pitch books and related items in America. Bushey's collection will be complemented by a strong selection of magic memorabilia, books, and posters. In addition, the auction will feature a selection of choice antique apparatus, and the largest collection of Mikame Craft-made props to ever come to market. A collection of original props, books, and decorative objects from the collection of Kalanag, the famous German illusionist, will also be in the auction. Catalogs ship approximately three weeks prior to the auction. Previews take place in our Chicago gallery October 18 -19, from 10:00am to 5:00pm.


* * * *
Potter & Potter has a full staff of people trained in all aspects of the business but, according to their webesite the two principles are Gabe and Sami Fajuri, with their experience listed as follows:

Gabe Fajuri
Finding and auctioning rare and unusual objects is Gabe's passion. Widely regarded as an authority on magic history and collectibles, he co-founded the auction house in 2007, after conducting a not-to-be-believed appraisal of Jay Marshall's legendary collection (to read the story of this Herculean task, click here). Since then, he's discovered and brought to market an astonishing variety of material, from original Houdini mementos, to rare posters, early books, and more.

Sami Fajuri
Our managing auctioneer, Sami brings decades of experience in the fields of antiques, paper Americana and collectibles to Potter & Potter. Sami has a strong background in the auction and collecting fields, having operated a wholesale auction firm specializing in philately and cartophily for over 15 years. Other areas of specialty include antiquarian books and tobacciana.


Potter & Potter auctions off more than just magicana. Their auctions feature rare manuscripts, posters, circus and Wild West, movie and music memorabilia, gaming, antiques and other valuables, though when you scroll through past and future auction listings this is clearly one of the places magicians and fans of the magic arts like to go shopping, or collecting.

* Those wishing to know specifically which lots or items were part of the Bushey collection may contact Terry Roses, John's mentor, via his website at DetectMarkedCards.com
** Dylan was once asked "If you could go back in time to experience any one moment in time, what would it be?" and he replied, "To see Houdini shackled and placed in a chest when he was dropped into the East River. Here is John Bushey performing a bit of Houdini magic at the 2014 Salute to the Music of Bob Dylan.
Ed Newman at 6:35 AM
Share